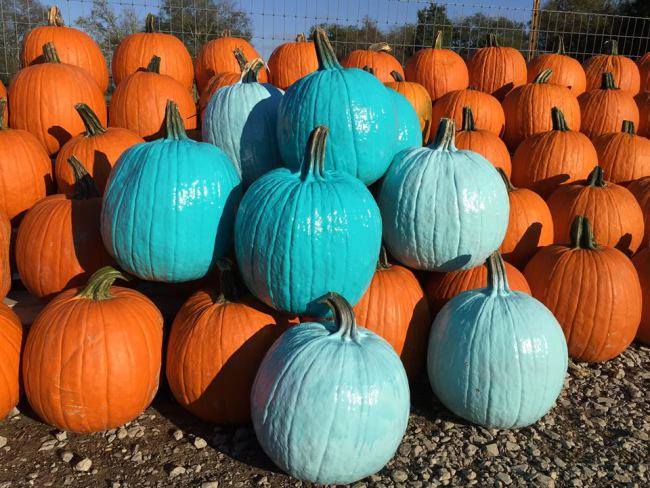 It’s mid-October, which means the season of teal pumpkins is upon us! We know what you’re thinking – pumpkins are orange, not teal. And while it’s true that you won’t be able to find this hue growing naturally in your local pumpkin patch, the unusually colored gourd holds a lot of meaning for millions of children.

The Teal Pumpkin Project®, a national awareness campaign launched by Food Allergy Research & Education (FARE) in 2014, was inspired by an idea from food allergy mom Becky Basalone, co-founder of the support group Food Allergy Community of East Tennessee (FACET). Becky painted the first teal pumpkin for food allergy awareness back in 2012, and shared her idea with fellow support group leaders and FARE.

Becky and FACET promoted the “Food Allergy Awareness Pumpkins” throughout 2012 and 2013. The idea behind this grassroots initiative was that when a child with dietary restrictions saw the teal pumpkin, they would know that this house would have safe, non-food treats.

Wait – Halloween without candy? How is this even possible? Although most people associate Halloween with a grab-fest of sugar-laden treats, to kids with food allergies, diabetes, Celiac disease, or other medical conditions, the night is fraught with danger. It isn’t the goblins, witches, and ghosts that make this the scariest night of the year, but rather knowing that the treats they receive might just kill them.

Displaying a teal pumpkin does NOT mean you won’t be handing out candy. Not at all. It simply means that you will be providing an alternative to allow all children the opportunity to participate in trick-or-treating.

Becky’s grassroots campaign was so successful in her community in Tennessee, that she decided to spread the word more widely. Children across the US – and in fact across the world – shouldn’t have to worry about facing their allergens on Halloween.

FACET is one of more than 100 FARE-affiliated food allergy support groups across the country. FARE loved Becky’s idea, and in 2014 partnered with her to adopt it as a national campaign. FARE coined the phrase TEAL PUMPKIN PROJECT® and created materials for an awareness campaign on social media. It immediately received overwhelmingly positive feedback both from inside and outside the food allergy community. With support from Becky, FARE registered the TEAL PUMPKIN PROJECT® name and logos to preserve the spirit and integrity of this campaign.

Companies that have licensing agreements with FARE to produce Teal Pumpkin Project-branded items include Mello Smello and Fun World. FARE also has promotional partnership agreements with Oriental Trading, Michaels, and CVS. These popular retailers will be shining a spotlight on the campaign through their marketing and public relations efforts. If you don’t want to paint any of your orange pumpkins teal, you can find ready-made teal pumpkin decorations (that can be used again and again for multiple years) at various retailers, or you can print out a handy sign for your front door. Heather A. Sapp is the Senior Trademark Attorney at LegalForce RAPC. Prior to joining LegalForce, Heather was a Trademark Examining Attorney at the U.S. Patent & Trademark Office for more than a decade. She is also a popular speaker on the writers’ conference circuit, speaking on intellectual property issues for authors under her Young Adult fiction pen name, Amanda Brice.

Why do you think the Teal Pumpkin Project® has become so successful? Can you think of any other grassroots efforts that have spurned licensing agreements? Will you be displaying a teal pumpkin? Let us know in the comments!