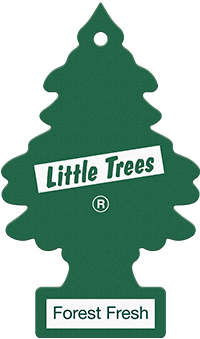 After escaping Nazis and settling in New York, Julius Sämann invented the “Little Trees” car air fresheners in 1952. Today his company, Julius Sämann Ltd., licenses its design and formulas around the world. In October 2018, Little Trees sued Balenciaga for trademark infringement over the fashion house’s new line of keychains.

When people think of trademarks they usually envision composite marks, which are made up of design and word portions. However, most US trademark applicants apply for “standard character” trademarks where the trademark only protects the text portions. Standard character marks offer flexibility, as owners can use the wordmark in any font, color, or display and still be federally protected. For design marks, the colors or format that is registered is usually the only version that is protected. Design marks may the best option depending on the applicant’s situation. Therefore, applicants should consult with a trademark attorney to figure out if a designmark, wordmark, or composite marks best suits their needs.

In addition to wordmarks CAR-FRESHNER and MAGIC TREE, Little Trees owns the designmark, U.S. Reg. No. 719498. The mark was first used in commerce in 1952 and has been federally registered since 1961. By just protecting the outline of the evergreen tree and the rectangle portions, the mark is distinctive enough to maintain registration while giving the corporation the flexibility to change. As seen below, the registered symbol ® is in the center of the Little Trees product as the shape of the good is the trademark. In 1917, Cristóbal Balenciaga founded his eponymous fashion brand. Balenciaga became infamous for avoiding press and not showing collections until after his clothes had shipped, presumably to prevent Christian Dior from copying his designs. Today, the fashion house is owned by the Chilean fashion conglomerate Kering, who also owns Gucci, Alexander McQueen, and Yves Saint Laurent. The current creative director of Balenciaga is Demna Gvasalia. Vogue has described Gvasalia’s work as “appropriation and refinement of mass culture into tongue-in-cheek garments.” The designer became famous at Vetements where a stripeless version of the DHL uniform sold out in weeks after Paris Fashion Week, even though it was £185 and the DHL uniform sells for $15. The shipping company gave Gvasalia the right to use the logo in exchange for 20 shirts, but it is unclear if this agreement was reached before or after the shirt went viral. Other pop-culture shirts produced by Gvasalia include Justin Beiber and Titanic images. From the Balenciaga’s Spring 2019 Ready-to-Wear collection, it had appeared Gvasalia had departed from his logocentric designs to focus on innovative shapes. However, Gvasalia has not abandoned his Vetements pop-culture appropriation aesthetic as evidenced by the launch of Balenciaga’s tree keychains.

Little Trees has a long history of licensing its intellectual property with companies ranging from Kia Motors to Capital One. While DHL did not license their logo and was grateful for the media attention, Little Trees has a long history of protecting its trademark through aggressive litigation. It was an oddity in 2015 for an up-and-coming designer to present a global shipping company’s logo on the Paris runway, but today, logocentric and normcore are mainstream fashion movements. Gvasalia and Balenciaga, with the legal team of Kering behind them, should have known that Little Trees would sue. Either Balenciaga understood this and still copied the design for news coverage or the fashion house believes they can overcome the allegation of trademark infringement.

Defenses against an allegation of trademark infringement include parody. Trademark parody is the appropriation of another’s mark for humorous effect. The Fourth Circuit Court of Appeals outlined the factors in Louis Vuitton Malletier, S.A. v. Haute Diggity Dog, LLC, 507 F.3d 252 (2007). The company Haute Diggity Dog sold a dog chew toy in the shape of a Louis Vuitton handbag with the literal elements CHEWY VUITTON. The Court found that the toy was a parody of Louis Vuitton bags and was a humorous juxtaposition of the luxury handbag with something for a dog to destroy. In addition, the Court found the goods travelled in different trade channels and the Haute Diggity Dog product was unlikely to be confused with Louis Vuitton’s luxury goods.

Balenciaga may argue that their keychains are a parody of Little Trees’ product. Little Trees’ air fresheners are often sold in gas stations for $1 while Balenciaga only has 5 outlets in the USA and their keychains sell for over $270. Taking something cheap and useful and changing it into an expensive, decorative object is not generally funny. Balenciaga’s product is more of a parody of the consumers who rushed to buy Balenciaga’s products even though there are cheaper versions available then it is a parody of air fresheners. Social commentary on consumerism loses its humor when the “parody” is sold for 270% more than the original object and the brand is the darling of fashion critics.

Man Repeller described Gvasalia’s brand, Vetements, as “a deeply reactive entity that rejects the ateliers of Paris with their fanciful ideas of what women should look like and responds instead to what a new generation of women already do look like.” These “fantasy versus reality” designs may make for interesting fashion blogs, however something can be ironic, subversive, or satire and not meet the legal requirements of trademark parody. For a trademark to be a parody, the original mark must be famous and the derivative must conjure up the famous mark and spoof it in some way. The central issue is whether the parody has distorted the original for humorous effect. While highlighting the difference of haute couture Parisian fashion and real life is a valid social commentary, it is unlikely Balenciaga’s keychains achieve parody. At best they are satire.

If a court finds that Balenciaga’s keychains are not parody, then the fashion house will have infringed Little Trees’ designmark. Even if the court finds Balenciaga’s keychains to be a trademark parody, there is still a question of likelihood of confusion. While they operate in different trade channels and spheres, Little Trees has licensed their trademark to multiple entities not normally associated with car fresheners, such as Buffalo Wild Wings. In addition, Little Trees sells other items such as luggage tags and keychains.

It is most likely that Balenciaga will not be able to overcome Little Trees’ allegation of trademark infringement as Balenciaga’s keychains are very similar to Little Trees’ trademark. Parody is not an absolute defense to trademark infringement and it is unlikely Balenciaga will be able to overcome the likelihood of confusion standard even if they show the keychains are a parody of an everyday object such as an air-freshener.

It is worrying that Balenciaga may have copied Little Trees’ designmark simply for news coverage, but the litigation by Little Trees may deter Gvasalia from copying other brands in the future.